In order to align with the emerging changes in the power sector and to promote new renewable technologies, flexibility was needed in the existing ‘REC mechanism’. Subsequently, On 4th June 2021, MoP(Ministry of Power) had circulated a Discussion paper on redesigning the Renewable Energy Certificate (REC) Mechanism.

What are the features of the revamped REC mechanism?

Key changes proposed by MoP are as follows:

Key takeaway of the proposed Mechanism-

Prime reason to have a limited validity of RECs was probably to safeguard REC mechanism against hoarding or market manipulation, ensuring that RECs are always traded at a reasonable price, and that it did not become a speculative commodity. However, the regulators have been required to extend the validity of RECs several times. This has mainly been driven by the fact that RPO implementation has been a major concern.

In light of the frequent extensions required in the past, it appears reasonable to remove a fixed validity of RECs altogether. However, in such a scenario CERC has to ensure that no hoarding of RECs takes place, and that it does not become a speculative commodity.

In the proposed amendment, the concept of floor and forbearance prices have been scrapped completely and the REC price during a particular trade session would be defined by the market. This will have certain direct and indirect implications –

Owing to the stay order for REC trading for more than a year now, the supply of RECs have piled up in the last couple of months. On the other hand, RPO clients could not fulfill their obligation for over a year due to the unavailability of REC. Considering these factors, along with the removal of Floor & Forbearance price, it seems pertinent that the reaction of the market would be quite dynamic in the upcoming trade sessions once the trade resumes.As per our speculation, if the REC trade is resumed, we can expect a reasonably good offtake of RECs where the prices can range between Rs. 1,500/REC to Rs. 2,500/REC.

In recent years, the stay on REC trading because of last CERC order on floor and forbearance price has resulted in steep decline in REC issuance. This can also be attributed to regulatory aspects which broadly indicates inefficient implementation of RPO for quite a long time resulting in diminishing incentive for new investments.

In our opinion, the proposed amendments would help encourage more and more generators to opt for the REC mechanism and REC may see new investment opportunities.

Bilateral mechanisms will allow generators to demonstrate sustainability and social impact. The generators can showcase the sustainability aspects of the project (other than the GHG reduction) and can claim premium over the achievable clearance price rather than being defined in two broad categories like Solar and Non-solar.

4. Technology multiplier to promote new and high priced RE technologies – Multiplier for new RE technologies can be a great initiative to incentivise and pave the way for “easy entry” of new and emerging technologies like off-shore wind, Pumped storage stations , hydrogen etc. 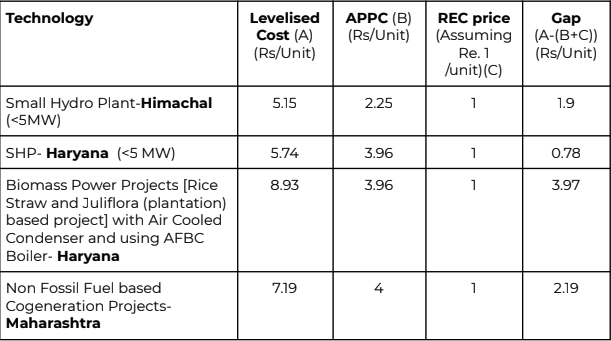 Additionally, projects like Solar and Wind which are currently in their mid life and were commissioned in such a period when the capital cost was high, will they be able to recover their ROI with a sudden release into the free market without any multiplier support, is still a question to ponder upon.

In order to implement these changes proposed by MoP,  a separate amendment would be required by CERC with a detailed guideline.

Redesigning REC Mechanism – A review on discussion paper by MoP